I loved what she said about my book, and the things she did not like wasn’t plot related. I’m glad to know my novel glued her to her seat. 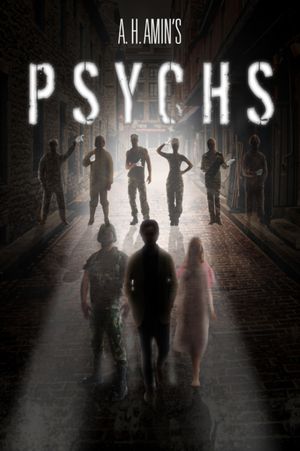 It started with a feeling, followed by a realization, then ended up into a future. All that started by the tragic event of his (Hassan’s) birth and revealed by a near death, and ever since, he had never been alone.

Sequential events started to occur in two cities, Dubai and Abu Dhabi, escalating into chaos. At that point, he finds himself in an enigma he’s not aware of its cause. Using his miraculous gift, which gave him knowledge and guarded him, he will be placed in that chaos to try and figure out the truth, and for that, he is being marked.

In these perilous times, he can only hope for a miracle, other than the one he has.

Oh yes, that’s how I lived my entire life ever since my memory recalls. I remember when my vessel was a kid’s size, walking in my neighborhood and answering to my neighbors and friends not by my name, I only answer when they call me Duke Fleed, a character from an old Japanese cartoon I love called Grendizer. Ninja Turtles became the next big thing so I became Leonardo afterward. I had more Aliases as a child than a senior government spy agent.

When I became older, much older I contained my world and characters inside my head, so much that eventually I stray away with my thoughts, sometimes gestures come out from me. Only my younger brother noticed them, and he knew why. My first time to ever share what’s inside my head was when I met a group of students who were discussing the making of a movie, it was about paranormal events that occur inside the students dorm. All I did was gave what I had imagined ever since I’ve been there, every time I looked at the escape ladder, the back alley or even the very unusual set of keys the doorman held… I realized how blessed I was for having a retained imaginative mind.

I believe it is important for a writer to never grow up, or should I say, never forget how it feels to be amazed, and through that, writers will know how to make readers retain or regain their child-like passion to indulge into new imaginations and new experiences.

Happy writing and reading everyone.

Hello everyone. I have just marked my calender on the 10th of November, it will be a date to look forward to and I hope it would be the same to you all.

I will be hosting a Q & A session on my blog, where I will first write in the post about the novel, then about me and finally about my journey to writing and publishing to give you a chance to warm up before you fire your questions in the comment section.

The post will take place on the date at 6:00 PM GMT. So please synchronize your watches and I hope to see you there.

Best wishes for you and all your beloved ones,

This is a picture of the first person to ever read my recently abandoned novel ‘Kima’. I used the word abandoned because of a quote I learned from Leonardo Da Vinci, he said ‘Art is never finished, merely abandoned’ Meaning there will always be a chance to add to what we create.

Kima is a fictional story set in the year 1928, it was inspired by a single event which occurred in South Africa, and ever since it happens every year. The story evolves around two young kids who get to hear an amazing story from an old woman named Kima. Will they learn from that unbelievable story why what happened had happened? And will an unconvincing story of the land, sea and the skies really change their lives? I hope the person in the picture will find out.

We share so much of our feelings and experiences no matter how different we are and where we come from, the one I’m sure we all shared was the need to be doing something, to pursue the sense of fulfillment. If we needed to express that feeling we experience we may all say the same thing… ‘There’s something inside me that needs to get out.’

Here’s where we start the same and then we differ afterwards. Art wants to come out, I would go further to describe it as an entity living within us, a vicious beast in a cage, waiting to be tamed before it exits. Some let it flow from the route it meant to travel through, and by doing so, it manifest it self on paper, in sound waves, on canvas or on the screens… and then there’s the others, the ones who ignore her roars, what we don’t know is that if we don’t let her out it will eat us from within.

It is a known fact that people with hobbies and outlets are happier and more productive, they are more fulfilled and less distracted, maybe guilt free too, why else we feel sad when nothing goes around us?

Tame her and then let her emerge, be patient as you design… Be creative, be happy… be with purpose.

I believe art is a single soul divided to all, but the manifestation depends on the catalyst. The catalyst is the person who holds that fragment of the art’s soul within.

Even though I said that about writing, it can also be applied to everything we do in our lives…

I was looking at some old pictures of my and my family’s childhood, old events and celebrations. I found my self staring at one image, an old image, searching my memories, not of the person in that image, for it was for someone I would never forget, I was searching for his name only.

Ryo, a kid who we shared a wall with his family a very long time ago… he was from Korea, and he was my first friend ever. He used to visit me everyday, he brings his toy cars to share them with me. The one I chose was white, his car was dark, one thing we did was driving them toward each other and just before they collide we swirl and make some car noises.

I remember the last day I saw him, it was just before the first gulf war, he was going back to where he came from. I was standing with my parents, I was crying, he was smiling and waving to me from the back window of the car as he was going away.

I’ll always wonder where he is now, and what are his accomplishments so far. Who knows, maybe its possible he’ll see my post and drop by. If not, well… I can only wish him well in his life.

I Just read the most recent review of my thriller ‘Psychs‘ by author Fran Lewis and other customers reviews at Amazon.com and Author House Bookstore. Amazing 5 stars reviews!

I have never felt so overwhelmed, they really loved my thriller. It is days like this I realize that my efforts did not go to waste. I have worked so hard to make my story and my characters compatible and lovable to my readers.

Read the reviews below to know how happy I am right now:-

‘… I read this in less than one day because I could not put it down. This is one book that will definitely make you think, give you pause for thought and make you wonder: Who Can I Trust? This is definitely a FIVE STAR BOOK….’

‘… two thumps up for this writter…’

‘… an intertwine between two worlds, the supernatural and scientific tactics…’

‘… thriller filled with twists, turns and definitely some miracles…’

More reviews are on the way, but the one I’m waiting for the most is the Kirkus review, which will be out there hopefully by the end of October or the beginning of November. Thanks to all those kind readers, I feel more confident about it.

Have a wonderful day everyone

Here’s a new day where the whole world gathered to see a man ascending to the heavens, we held our breathes to witness a great moment in history not far-fetched from the moment a man first walked on the moon. Having that thought in my mind I couldn’t help but wonder if Neil Armstrong was up there with him, patting Felix on the shoulder and wishing him good luck.

A star descended from the heavens to us mortals, showing us how courage and determination can change dreams into realities.

God bless you, Felix, and welcome back to earth.

Read the full story here in the Telegraph, UK

I received a message through my facebook page. It was from a reader from Germany expressing her thoughts about my book.

I loved the description she used about my novel, she said ‘It’s a thriller with wisdom‘,she shared her favorite quote where I used Backgammon as a concept of life:-

‘People think of life as a chess game, but the truth is life…is this..you role the dice, and you do your best with what you get.’

She also told me she had enjoyed the action parts and who her favorite character was, Adam Goldfish(Mine too).

I’m spending the rest of my day in zero gravity… that’s how happy she made me feel. Bless her heart.